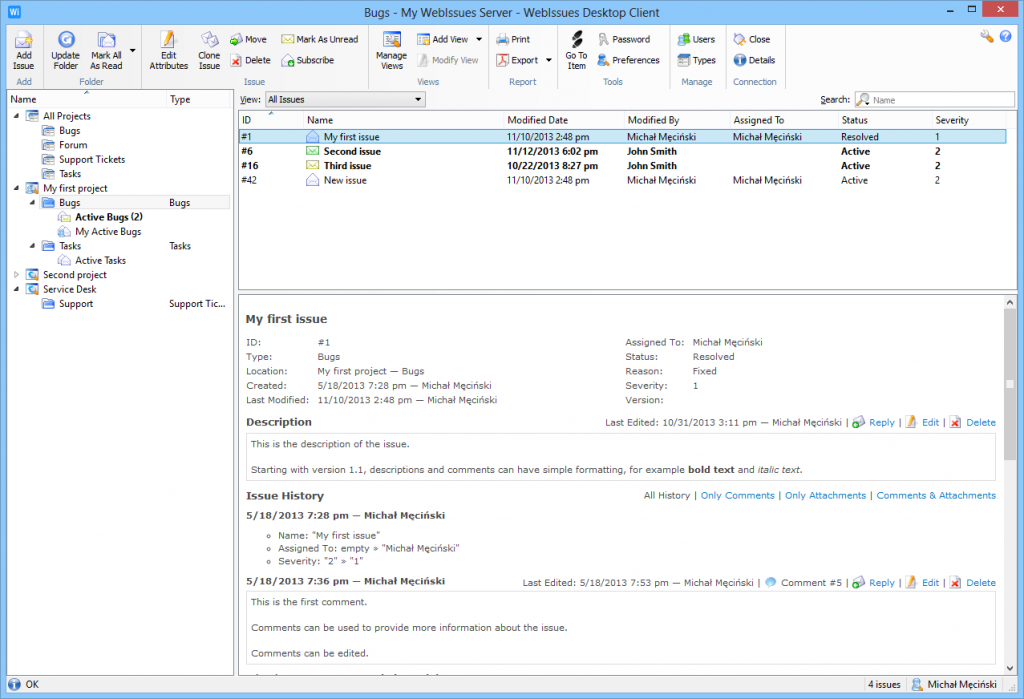 WebIssues is an open source, multi-platform system for issue tracking and team collaboration. It can be used to store, share and track issues with various attributes, description, comments and file attachments. It is easy to install and use but has many capabilities and is highly customizable.

I started creating a prototype version of WebIssues in 2005 as my master's thesis. The main goal was to create a simple team collaboration system which consisted of a client application written in Qt and a server written in PHP. The prototype was very limited compared to today's version, but many core concepts remained almost unchanged since then.

In 2006 I decided to continue working on this project and create a version that could be publicly released. I decided to rewrite the client application using KDE libraries, because at that time there was no open source edition of Qt for Windows, except for a very buggy unofficial port. After a year of development the program had all basic features implemented, including filters and the issue history view, and slowly started gaining some popularity in the open source community.

In 2007 I ported the client application back to Qt because I wanted it to be available for both Linux and Windows platforms and Qt 4 officially supported Windows. The transition took some time but I also cleaned up the code and made various improvements. I introduced some new features and a redesigned user interface. The project started to become quite popular and there were many feature requests from the community.

At some point it became obvious that I cannot keep adding new features without redesigning some of the core architecture. Also, although the desktop client was one of the main strengths of WebIssues, web applications were becoming much more popular and I realized that a web client for WebIssues was also very important. Finally in March 2009 I decided to start working on version 1.0 of WebIssues. It took me a huge amount of time, but finally in December 2011 it was ready for release.

Soon WebIssues became even more popular and I received a lot of very positive feedback from the community. Although I was a bit burnt out with this project and I started working on other things, I kept adding new features from time to time and two years later I released another major version, 1.1. At this point WebIssues became very stable and mature and since 2013 I only made minor fixes and changes, even though I still had some plans to release version 1.2 at some time.

In the meantime, the world of web applications changed dramatically. Even my own team started using more modern tools such as Trello for project management and we only kept WebIssues for bug tracking. I knew that WebIssues still had great potential and with some “face lifting” it could be a very powerful tool again, but I also remembered how long it took to create version 1.0 and I realized that I have other obligations these days which make it harder for me to work on large open source projects like this. However, in June 2017 I started experimenting with the first prototype of version 2.0 and I have plans to release something new in 2018.