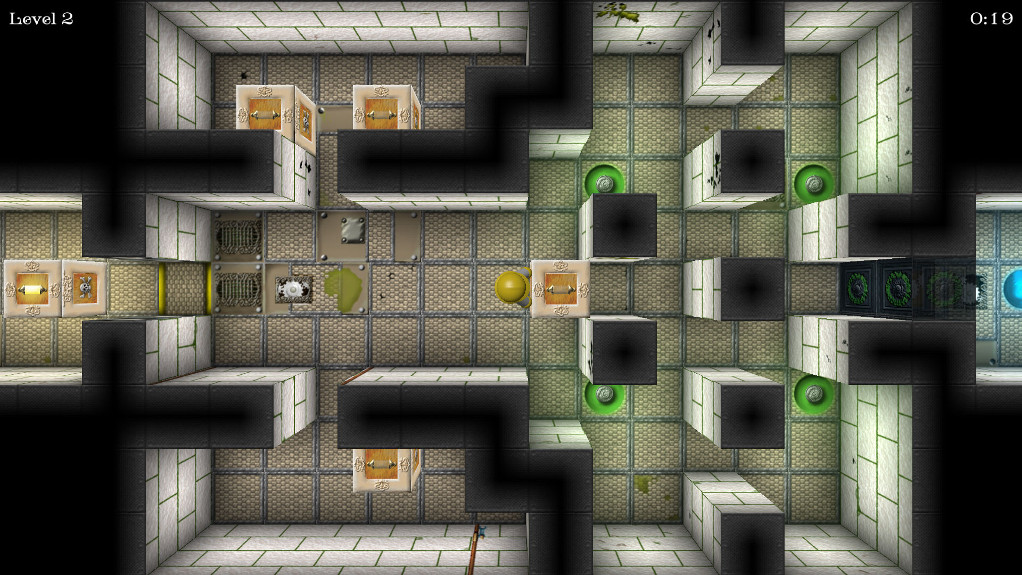 Mister Tins is a puzzle game for PC in a top-down perspective view. Its goal is to move boxes through three-dimensional rooms in order to open doors and reach the exit. It consists of 30 levels with varying difficulty.

The idea of this game came to my mind in September 2013. I watched a documentary called “Indie Game: The Movie” and then I played Fez, one of the games featured in that movie. It looked much like the traditional platformer games from the 1980s, but it added a third dimension to create a very interesting, unique experience. I thought that a similar idea could be applied to Sokoban, another classic game, by adding a third, vertical dimension to make the game more interesting and challenging. The name of the game is a pun on “This is not Sokoban”.

After a few months of coding I has an early, playable prototype of the game which seemed quite promising. I started looking for someone to help me with graphics and in November 2013 I invited Anna Krzon to join the team. She created very nice graphics based on the steampunk concept, with dark sewers riddled with rusty pipes and erratic clockworks that were a perfect fit for my vision of the game.

One of the biggest challenge while working of the game was designing the levels. Each of them started with some idea that I had to test and fine-tune until it was either accepted or rejected. The resulting levels are very diverse, some of them are mostly arcade style, with a lot of jumping between platforms and avoiding traps, while others require more thinking and puzzle solving.

The final version of the game was released in April 2014. I decided not to make it open source like most of my other projects and instead I tried to make it my first independent commercial project. It never made any money and literally the only people who ever played it were my friends. However, I still had a lot of fun making this game, I learned a lot from it, and in a sense it was a realization of my old dreams. Many of the first projects that I worked on when I was a teenager and I had an Amiga were games, and they were the reason I became interested in programming and turned it into a professional career.