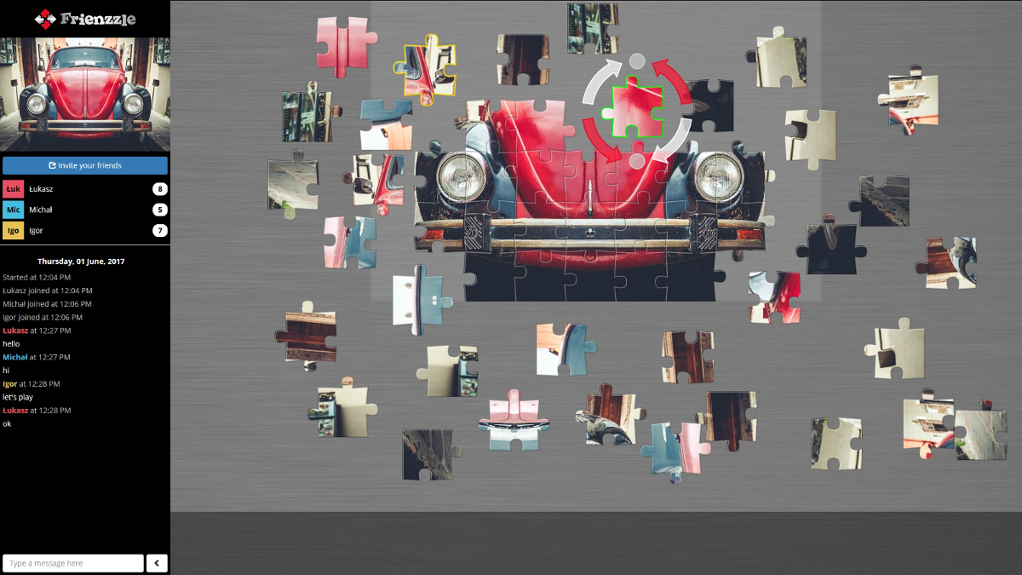 Frienzzle is an online jigsaw puzzle game which supports an unlimited number of players in real time. It was created for those who enjoy playing jigsaw puzzle with their friends or family. It's compatible with all modern web browsers, it also supports mobile devices.

The idea of creating a browser game written entirely in JavaScript came to my mind in August 2016. Initially this was going to be a retro-style 2D platformer game and I discussed that idea with my friend, Łukasz Grabowski, who was going to create graphics and animations for the game. The project was nicknamed “Cleaner”. In the meantime, in October 2016, I created a very simple prototype of a jigsaw puzzle game that worked in the browser, just to improve my JavaScript skills a little bit.

A few months later we realized that creating good enough graphics for Cleaner was going to be a very big challenge, and I also didn't really like the idea of creating another platformer game a few years after working on Mister Tins. At that time we started using Trello for managing some of our projects and I liked the idea that multiple people could work on a single board at the same time and they could see all the changes in real time. I connected this idea with the jigsaw puzzle game and I started working on a multiplayer version in which multiple people could collaborate on the same puzzles. In December 2016 we decided to postpone the platformer game for later and instead focus on the puzzle game, which I called “Frienzzle”.

The project took more time than I initially expected because I started to overcomplicate things which were not related to the game itself, but rather to the process of registering users, inviting other players to the game, etc. Finally in May 2017 I decided that I should simplify everything and finish this project as soon as possible. A month later the official version was released. Łukasz contributed a lot to the final look of the game and selected the stock photos that we used for the puzzles. We released the game using our company brand, Bulletcode, to emphasize that our team is capable of creating not just traditional business applications, but also modern, interactive web applications and multimedia content.