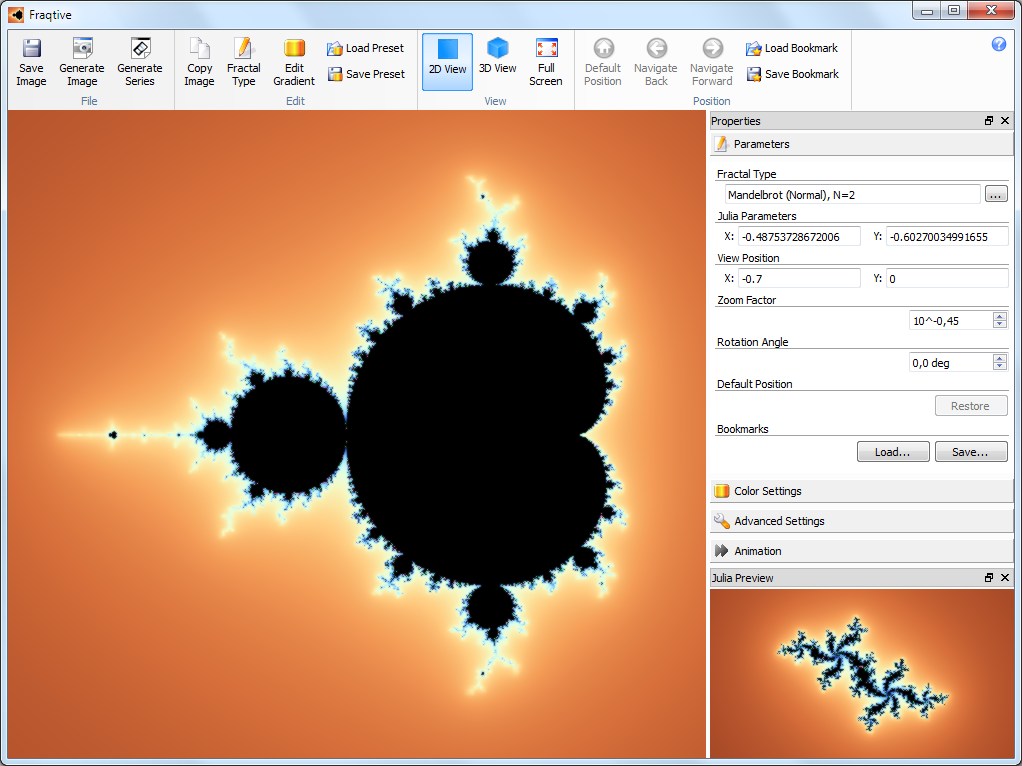 Fraqtive is an open source, multi-platform generator of the Mandelbrot family fractals. It uses very fast algorithms for maximum performance and generates high quality anti-aliased images. It allows real-time zooming navigation within the fractal and dynamic generation of the Julia fractal preview.

The history of Fraqtive started in 2001 when I created the first simple Mandelbrot fractal generator in just a few days. At that time I was working on another project called Grape3D, and at some point I got interested in fractals, so I decided to create a simple program just for fun. Initially it was called “Fractive”, from the words “fractal” and “interactive”. Shortly after finishing Grape3D I decided to return to this project. The fractal generation engine was already quite good, so I focused on the user interface, which was written in MFC. At that time I published my first open source component, which was an MFC control for editing various properties that I designed for Fractive. Unfortunately, I did not publish the program itself and some time later I lost its entire source code because of a hard drive failure.

In 2004 I was assigned with a programming project for the university, and as I didn't have any better ideas I decided to revive this project. This time I wrote it using the Qt framework so I changed the name to “Fraqtive”. In January 2005 I officially released the first version. Shortly after I decided to integrate Fraqtive with KDE and it became a part of the collection of open source applications called “KDE Extragear”. Thanks to that, Fraqtive became quite popular at that time.

I returned to this project again in December 2007 and I started working on a completely new fractal generation engine. It was based on the same very fast algorithms but supported multi-core processors, the SSE2 extension and more formulas than just the plain Mandelbrot. I also rewrote the entire UI again, this time using the Qt 4 framework. I released a few versions in 2008, gradually adding most of the functions that the original KDE version had.

In December 2012 I added a function that made it possible to generate a series of images that could be used to create a video. I also published a few fractal zoom animations on YouTube. In January 2015, I added an option to use multi-sampling when generating images which significantly increased the quality of the resulting animation. I also published another video generated using the new algorithm which had higher resolution and much better quality than the previous videos.